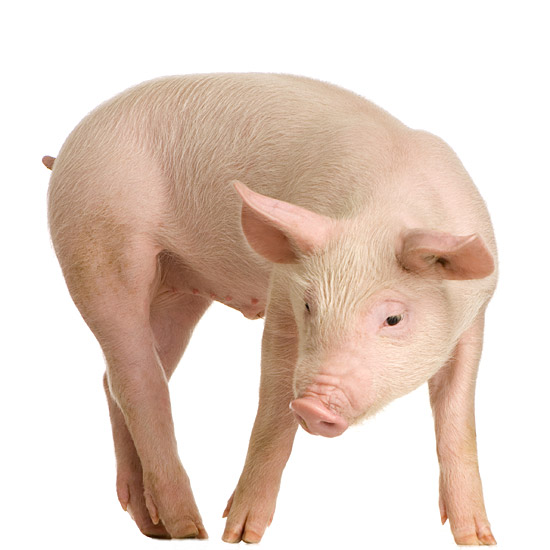 JELUVET® lignocellulose makes it easy to obtain a crude fibre content of 8% in the complete feedstuff, a requirement of the regulations relating to pig welfare, in an economical and hygienically impeccable way.

Lignocellulose without any risks

Our JELUVET® lignocellulose consists of insoluble crude fibre amounting to more than 65% of dry matter. JELUVET® contains mainly cellulose and lignin, that is, insoluble and inert fibres, of which only tiny amounts are fermented in the large intestine of the pig. As JELUVET® is freshly produced for each order, the common risks associated with harvesting and storing crude fibre sources made from crops are eliminated.

In ad-libitum feeding of pregnant sows, JELUVET® lignocellulose prolongs the feeling of satiety due to its high swelling capacity. JELUVET® accelerates the intestinal passage and prevents constipation. In addition, it improves the reproductive capacity of the sows while scarcely compromising protein digestibility. Since JELUVET® binds small amounts of acid, it is beneficial for piglet feeding because stomach acid protects the animals against diarrhoea pathogens.
Feeding recommendation: 1-2% in piglet breeding and 2-3% in ad-libitum feeding of pregnant sows.

Products such as sugar beet chips can result in greasy faeces of the sow, which may cause clogging of the slats. This leads to poor sanitary conditions, because cleaning of the stable via the slats is made difficult.
JELUVET® lignocellulose has a reliable water-binding capacity and increases the viscosity of the sow’s faeces. As a result, the faeces are soft yet properly formed. An accelerated intestinal passage also reduces the risk of constipation prior to giving birth. Since constipation increases the likelihood of contracting the MMA disease, a reduced constipation risk also lowers the risk of MMA.

JELUVET® does not contain any nutrients, nor any bulk elements such as Ca or P. Therefore, JELUVET® can be added to a ration that has already been calculated without any problem. This is beneficial for feeding pregnant sows because a small content of the Ca and P bulk elements in the ration is considered to be related to a reduced MMA ratio.

JELUVET® is absolutely free of mycotoxins. The rate of abortion and miscarriage caused by mycotoxins and the severity and number of fertility problems they give rise to are facts that clearly speak for using a crude fibre source that is not adulterated. JELUVET® lignocellulose excludes the risk of adding mycotoxins to the ration.

The water-binding capacity of conventional and commonly used sources of crude fibre is limited: wheat middling is able to absorb about 190% of water, grass cobs about 270% and sugar beet pulp about 340%. The water-binding capacity of JELUVET®, however, is more than 500%!
This means that the crude fibre swells heavily in the sow’s stomach, resulting in a long-lasting satiation effect. This avoids overfeeding under the ad-libitum feeding system and effectively eliminates the risk of adiposity by decreasing the caloric value of the feed ration.
The outcome is a healthy and calm stock.

JELUVET® is a completely natural and efficient product. In restricted feeding systems, the positive effects of JELUVET® are best manifested by adding 1 to 2.5% to the feed. Especially in warm periods, it should be ensured that the animals drink enough water. In weaned piglets, lignocellulose can increase the heights of the intestinal villi and regulate inflammatory markers, which is generally considered to have a positive effect on intestinal health.

JELUCEL® has a consistent cellulose content of about 95.5% of dry substance. Even our cellulose is a standardisable and nutrient-independent crude fibre component that is 100% free of mycotoxins.
Natural cellulose can prevent diarrhoea in piglets after weaning. We recommend 0.5 to 1.5% of JELUCEL® in piglet feeding.

The German Order on the Protection of Animals and the Keeping of Production Animals (German designation: Tierschutz-Nutztierhaltungsverordnung) requires 8% crude fibre in the dry matter of a complete feed or 200 g crude fibre per sow daily. With JELUVET® lignocellulose, this recommended content can be easily achieved.
With traditional cereal-based rations, a maximum crude fibre content of 4% can be reached. So the traditional ration still needs an additional dietary upgrade of a minimum of 4% of crude fibre. In order to achieve this, the content of a traditional crude fibre source should be increased by 20 to 30%. This is the only way to obtain the required additional crude fibre content of 4%! This is not reasonable from a calorific, hygienic and economic point of view. Therefore, we also recommend JELUVET® in restricted feeding systems. Since JELUVET® has a high crude fibre content, only a small fraction of the amounts of commonly used crude fibre sources is necessary. In most cases, the addition of 1-2% is sufficient. Thus, this way of crude fibre enrichment is not only easier and bears fewer risks from a nutritional perspective, but is also more cost-efficient.

Packaging and fields of application