Crude fibres have a positive impact on the animal welfare of breeding sows. The solubility and fermentability of the fibres are essential for this effect to take place. Insoluble and non-fermentable crude fibres such as our JELUVET® lignocellulose improve the sow’s well-being. But that’s not all! A field trial conducted in Brazil shows that our JELUVET® lignocellulose also has a positive influence on piglet breeding.

The field trial on a breeding farm

With the support of JELU-WERK, our Brazilian distributor commissioned a university to conduct a field trial. The university investigated the effects of crude fibres on the following parameters: farrowing rate, weight of piglets at birth and weaning weight.

The field trial shows that JELUVET® lignocellulose is a good alternative to other crude fibres. Insoluble fibres not only have positive results on animal welfare, they can also be used to optimize piglet production.

Our JELUVET® lignocellulose consists of pure plant fibres and is composed primarily of cellulose, hemicellulose and lignin. The proportion of crude fibre in the original substance is at least 65% (with a moisture content of only 6-7%), which is higher than in other, common crude fibre sources. 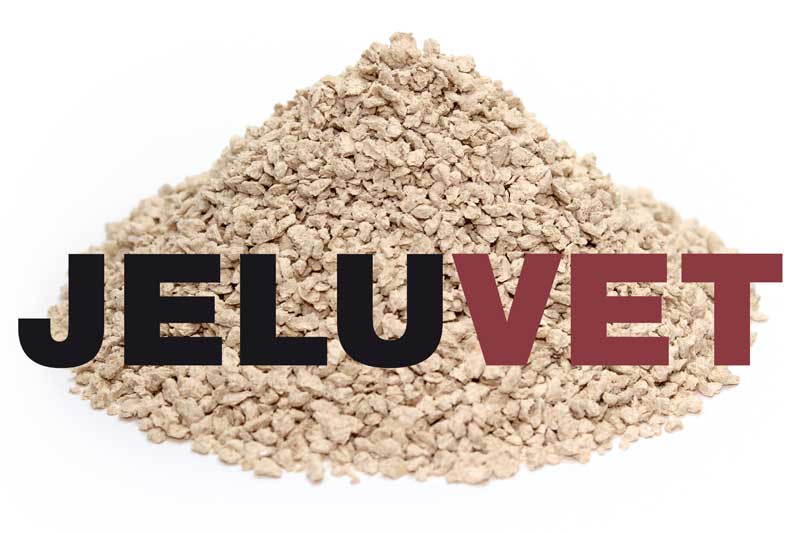 JELUVET® is an insoluble and inert crude fibre, which has positive effects on animal digestion: it accelerates intestinal passage and promotes peristalsis. These two aspects play an important role, in particular in the diet of pregnant sows.

Excess weight in pregnant sows has disadvantages for animal welfare and farrowing. Restrictive feeding is therefore used to try to regulate the sows’ weight. Insoluble crude fibres such as lignocellulose guard against excess weight because they reduce the energy content in the food and the calorie intake. The sows can thus achieve a more suitable weight when the lactation phase begins. In addition, the sows have fewer difficulties in farrowing, show a calmer behaviour and crush fewer piglets.

Lignocellulose has a high swelling capacity and binds lots of water, thus helping the food pulp to swell very efficiently in the gastrointestinal tract. The animals are full more quickly and experience less hunger stress. Another advantage is that satiated pregnant sows spend more time resting.

Since the intestinal activity decreases during pregnancy, constipation may occur. A feed that is enriched with insoluble crude fibres can prevent this. Lignocellulose stimulates peristalsis and accelerates intestinal passage. As a result, the faeces consistency improves, lowering the risk of the animals suffering from MMA (metritis, mastitis and agalactia).

Animals fed with lignocellulose take in more water. This is due to the crude fibre’s high water-binding capacity. The lignocellulose doesn’t only stimulate water intake, it also aids milk production, being beneficial for lactation and improving the reproduction rate of subsequent births. Last but not least, insoluble fibres also help avoid the typical behaviours of fixated sows.

Lignocellulose can be used to feed the piglets during the weaning phase. The fibres bind the water in the faeces, preventing diarrhoea. They also reduce E. coli bacteria in the bowels. Moreover, the fibre complex of lignocellulose ameliorates the development of intestinal villi and improves feed conversion. This, in turn, leads to higher daily increases in piglets.

The field trial results were collated in a scientific opinion. If you’re interested, we’ll be happy to send it to you. Please send us an e-mail and specify the desired language version. The statement is available in German, English and Portuguese.

This entry was posted in Pets and Livestock on Wednesday, 30. June 2021.